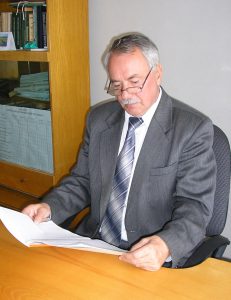 The Department of Applied Mechanics was organized in 1988 on the basis of the Departments of Structural Mechanics and Machine Details and Theory of Machines and Mechanisms.  Both departments were created as one of the first when the Lviv Forestry Institute was established in accordance with the order of rector Garuzov V.I. dated October 22, 1945.  The first head of the Department of Structural Mechanics was appointed associate professor I.F. Shabunho, who headed the department until 1961. From 1961 to 1986 the department was headed by prof. N.M.  Bela.  During the years of her work, the scientific school "Cable timber transporting" was formed at the department.  The scholars of this school, led by prof.  N.M. Bela has defended 2 doctoral and 18 PhD theses.  In 1988-1989  Acting Head of Department prof.  Martyntsiv M.P.

The Departments of Machine Details and Theory of Machines and Mechanisms were led by renowned scientists and educators.  Among them is Honored Worker of Science and Technology, Doctor of Engineering, Professor Tyr K.V., Doctor of Engineering, Professor Tinny A.N., Ph.D., Associate Professor Hoffman О. I. The first head of the Department of Applied Mechanics from 1989 to 1990  was the doctor of technical sciences, professor Tepliy M.J. Since 1991 the department has been headed by a doctor of technical sciences, professor Lutyj E.M.